Tiwanaku Alien and the Nazca Lines 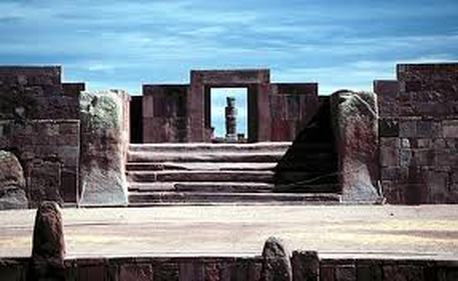 TIWANAKU ALIEN AND THE NAZCA LINES
By Morten St. George

A quick review of Andean archaeology.

A few years ago I saw a directory listing with a description of something like: "I was abducted by aliens last summer. It really happened." Though I had a lot of interest in aliens, I did not even consider visiting that website. Of course, if this person was genuinely abducted by aliens, I would want to read about it but I have learned from experience that there was almost no chance of this being a true story. In some ways it is wonderful that humankind has advanced to the point of ignoring all the nonsense and quackery. On the other hand, if anyone really did have contact with an alien, it would be almost impossible to get any attention.

Case in point are drawings coming out of the Andean region of South America and dating from early medieval times. Here I am not referring to the famous lines of Nazca (Nasca) which could have a non-alien explanation. I am referring to the drawings of the city of Tiwanaku (Tiahuanaco) in the Bolivian highlands. In Tiwanaku, we do not find geoglyphs (ground drawings) but direct depictions of the alien himself. It does not take a lot of imagination to envision a four-fingered creature (the face is clearly non-human) wearing an astronaut's helmet with a transparent visor. One engraving has twenty fish-head symbols overwhelmingly indicating that this creature was an aquatic. Indeed, it is easy to imagine that the astronaut's helmet was filled with water. Tiwanaku drawings strongly imply that this creature was a fish.

Enter the cynics: "They ate fish and made a drawing of the local fisherman." Archaeologists have determined that Tiwanaku was an agricultural community but, true, Lake Titicaca is only some twenty kilometers away. Fortunately, not all the depictions of the alleged alien display fish head symbols. In some, the fish heads are gone and replaced with condor heads (symbolic of flight). Hence, this creature was not only a fish, it was a flying fish, whence it became a sky god, the sky god of the Andes. No doubt, the cynics will now counter, with total disdain for the intelligence of the Andean peoples: "They ate birds too, and this is the local bird hunter."

Depictions of the Andean sky god are found not only in Tiwanaku, Bolivia, but also in Nazca, Peru, where he turns up not in the geoglyphs but on their pottery dating from the same epoch. The city of Tiwanaku is much older than the Nazca Lines but archaeologists have noted stages of development. The timing of Tiwanaku's sky-god phase does indeed correspond with the timing of the Nazca Lines, and the Nazca depiction is close enough to the Tiwanaku depiction that we can conclude that these sky gods are one and the same. This has always been the major hurdle for alien theories about the Nazca Lines: lots of ground drawings to be viewed from the sky but no depiction of the aliens. If you want to know for whom they made the lines, don't look on the ground. Look at their pottery. The Nazca drawing displays a small cross-like instrument (also found in Tiwanaku drawings) on the alien's chest and a loudspeaker-like instrument, perhaps reflecting that the aquatic sky god was able to learn the Andean languages and communicate with them. Looking beyond the cultural boom of the century following the alien's visit, there is reason to believe that the Andean cosmological view of the night sky as made up of constellations of dark nebulae, rather than constellations of stars like in the rest of the world, was a derivative of direct communication with the alien.

But there is one critical difference between the Tiwanaku drawings and the Nazca drawing. In the Nazca drawing, the alien is depicted with human-like feet, though the fish heads just above the feet and looking down suggest that these are not really human feet but fish feet. Nonetheless, no Tiwanaku depiction of their sky god shows the alien with feet that even remotely resemble human feet (feet are seen only in depictions of animal and human symbolization of the alien's qualities, never on the sky god himself) and in fact their direct drawings of the alien display no feet at all. That makes sense. The alien didn't have feet but rather an aquatic tail that dragged behind it and hence was not visible from a frontal view. Thus, the artists of Nazca made the pottery drawing from one of Tiwanaku's frontal image depictions that happened to reach them, and then they merely improvised the feet. In other words, it is very likely that the people of Nazca never saw the sky god directly else they would have known better.

So what did the alien's fish feet really look like? That's easy to answer. While the people of Nazca never saw the alien up close, the people of Tiwanaku sure did and they provide us with plenty of drawings. The alien had an aquatic tail that split into three appendages, and each appendage ended in a pod with three toe-like protrusions. In one drawing, the alien's arms are raised up as it is about to launch itself into the air. Apparently, the displayed hand-held devices are providing the power, likely an anti-gravitational field around the alien as its tail (lighter than the body) is rising first. The left and right pods are displayed upward and outwards while the middle pod of the alien's tail is depicted up above the alien's head. This also explains why we don't find drawings of any type of landing craft. To all appearances, the alien didn't use landing craft. It simply put on its water-filled space suit, grabbed hold of its powerful instruments, and then spiraled down to Earth (the Andeans made so many drawings of spirals that we have to conclude that the alien descended from the sky in a spiral motion, like water funneling down a drain). Meanwhile, the puma heads seem to suggest that the alien did not rise up into the sky in complete silence, that is, creation of the anti-gravitational field may have made an audible "roaring" sound.

The artists of Tiwanaku also made drawings displaying the alien's tri-pod tail intact. These drawings resemble the Candelabro geoglyph found on a cliff facing the sea in Paracas, Peru. Evidently, the people of Paracas believed the aquatic sky god lived in the sea, from where it emerged to take off into flight. However, as already suggested, it is plausible if not likely that the people of Tiwanaku believed the sky god came from the dark clouds of deep space.

The Tiwanaku "on-liftoff" drawing adds more symbolism of note, namely human heads (a symbol of intelligence) attached to the alien's head. The people of Nazca also knew that this fish was intelligent. One of the Nazca geoglyphs displays a human head attached to the head of the fish. But this is just an ordinary fish and looks nothing like the alien. Surely, if they had seen the alien, they could have done better than that. In a sharp departure from what I have stated in the past, I no longer believe that the people of Nazca had direct contact with the alien. More likely, stories about the sky god (as well as the frontal image) came down to them from the mountains and they made those geoglyphs only to attract that sky god to them and to guide it to them. In other words, that massive project in the desert was for a sky god they never saw. But we should not be too critical of them. For example, contemporary Christians are building churches all around the world.

In specific, the Nazca pottery drawing depicts the middle pod up above the alien's head, just like the Tiwanaku drawings, but by attaching human-like feet to the creature they clearly did not know what it was. The people of Nazca had to have been in possession of a Tiwanaku image, perhaps brought to them by a "missionary" from the Tiwanaku civilization.

Some of our scientists would have us believe that the ancient peoples of Nazca flew around in hot-air balloons, hence they made those ground drawings to help sell balloon-ride tickets.

Archaeological evidence from the Andes overwhelming supports the theory of contact with an alien. There are dozens of surviving images of the alien from Tiwanaku alone. In great detail, these drawings depict the alien's fish-like face and mouth, its reptile-like eyes, its astronaut helmet replete with sunlight reflectors around the visor and air bubbles inside the visor, its four-fingered hands, its tri-pod tail, its front-mounted voice transmitter, not to mention those hand-held instruments that suddenly contracted and split open upon liftoff up into the sky.

Turning a blind eye to all this evidence, our scientists continue to propose one ludicrous non-alien theory after another. I read about a new one just a few months ago. It seems that scientists from National Geographic came up with conclusive proof that the Nazca Lines have nothing to do with aliens: they found that some of the lines point to water sources. I saw just a brief clip so I don't know how they explained the circular-type drawings (which obviously point to nowhere) or explained how the people of Nazca managed to get airborne in order to follow the lines. Nonetheless, this may be the first scientific theory to make a little sense. It is only logical that the people of Nazca would want the lines to point to water. After all, as we just noted, this flying alien was a fish!