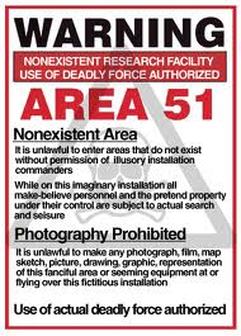 Of all I saw at Area 51, 95% remains hidden from the public. Going into Area 51 is like going into another world, where they are terribly afraid that other countries and other parties are going to get "this" information. Their thoughts being "if we admit that the Earth is hollow, with a central intelligence in it, this is going to cause discord and fear". This fear process is generated by the private companies who seek to control and advance their own needs and personal agendas through Area 51.

I left the Air Force due to their domineering ways by those who sought to act like control freaks, who were stagnating my ability to think and act in a creative manner. In accepting their Orders not to talk about such information, they take it for granted that one will automatically obey.

Because of my outgoing desire to share information and inform the public at large my Service Pension and all my benefits and rights such as the use of the Commissary, dental and medical, were taken away.

I was in the military for 13.5 years, from basic to the Pentagon and then to Area 51. The genetic engineering that is taking place at Area 51 is with our younger generation. The "milk carton children" whose photos were commonly seen in the markets in the past, were abducted and taken to Area 51.

Level 16 of Area 51 is the genetic engineering level, where they are using our children for experimentation in longevity and powers of the mind. The major force behind this is what is termed as the "Secret Government". There are civilians of the Secret Government which are in control in several areas of Area 51.

There is a network of tunnels underground that go all the way to Europe, South America - the several continents. And there is an intermingling of this great network of tunnels throughout the globe, of which many governments use. God bless you and be with you,